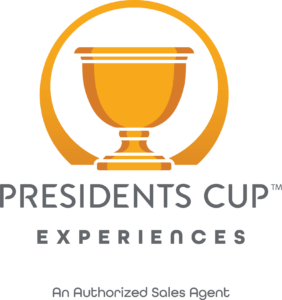 The Presidents Cup 2024 at Royal Montreal

The Presidents Cup returns in 2024 to Royal Montreal Golf Club for the second time ever. As host of the 2007 Presidents Cup, Royal Montreal will become the second international venue to host the event more than once, joining Royal Melbourne Golf Club in Melbourne, Australia. The Presidents Cup 2022 was hosted by Quail Hollow Club in North Carolina, USA. Canada’s hosting of the prestigious golf tournament marks the ‘International’ host for the event which rotates between the United States and an International country.  Dates for the event are yet to be confirmed. The Presidents Cup is a series of men’s golf matches between a team representing the United States and an International Team representing the rest of the world minus Europe. See future hosts for the tournament.

Be there in 2024 at Royal Montreal Golf Club to witness history unfold for the second time since 2007. Voyages.golf is your guide & travel partner with tickets and travel packages to the Presidents Cup in Montreal. Travel the world playing golf; contact us or join the waitlist now.

Upgrade to the Captains Club and enjoy a fun, lively venue and premium place to experience the Presidents Cup from. Enjoy being protected from the weather and the convenience to come and go from the venue throughout the day. Ideal for entertaining family, friends and clients.

Throughout its almost three-decade history, The Presidents Cup has been staged all over the world including Australia, USA, Canada, South Africa and Korea. The only two venues to host the Presidents Cup multiple times are Royal Melbourne and Robert Trent Jones Golf Club in Virginia. Royal Montreal is the third club to gain access to this exclusive list. The golf tournament is unique in that it has a stadium-like atmosphere with grandstands, numerous hospitality options, international cuisine and a positive community spirit that transforms local areas leading up to the event within the spirit of golf.

The Presidents Cup tournament is unique in its format of play. Occurring over four consecutive days from Thursday, 22 September to Sunday 25 September 2022. There are three days of team matches of alternate shots (foursomes), and better ball (four-balls), followed by Sunday singles. The scoring is determined on a hole-by-hole basis where there are 30 total points. This differs from the Ryder Cup which goes for three days and involves 28 points.

If the competition is even at the end of singles play, the result will be a tie and both teams will share the Presidents Cup. This differs from the Ryder Cup where the team that last won the tournament would retain the Cup.

Royal Montreal is the oldest Golf Club in North America; it was founded in 1873. It was originally Montreal Golf Club until Queen Victoria granted use of the ‘Royal’ prefix in 1884. After the club moved locations through the years, it settled to Ile Bizard in 1959 where Dick Wilson constructed 45 holes. The Blue Course was updated by Rees Jones and is ranked in the World Top 100 Golf Courses. Royal Montreal was one of the five founding Clubs of the Royal Canadian Golf Association which will be 129 years old in 2024. The Club has hosted the Canadian Open various times from 1908 to 2014. As one of the oldest and most prestigious golf clubs in the world, Royal Montreal Golf Club is the ideal International venue for the Presidents Cup 2024.

Join the waitlist for this event

Get early access to product and information for this golf event as soon as it becomes available.

You will only be notified when new product is available for the event, tour or cruise you joined the waitlist for.