Formed in 1786, the Society is the 7th oldest golf club in the world. The two courses - Balcomie Links and Craighead Links - combine spectacular views and extraordinary holes to provide challenging and enjoyable golf. The society is the seventh oldest golf club in the world. Its oldest course, Balcomie, was formally laid out by Old Tom Morris in 1894, but competitions were played there since the 1850s. The courses are 3.2km north east of the fishing town of Crail, and the land upon which golf is played straddles the easternmost promontory of Fife, known as Fife Ness. The East Coast of Fife is particularly dense in links courses and is popular for golf tourism. Crail is 16km south of St Andrews and 6.4km from Kingsbarns. To the south west are the links of Elie, Anstruther, Lundin and Leven. Within an hour to the north are Scotscraig, Carnoustie, Monifieth and Panmure.

A combination of stunning coastal views, centuries of history and hugely enjoyable golf is what makes Balcomie Links one of Scotland's most finely polished, golfing gems. This traditional, classic links course was laid out by the old master himself, Tom Morris, and opened in 1895. Created in the days when course design was governed by the natural lie of the land and not the mechanical earth mover, Balcomie has the unusual combination of three par-five’s, six par-three’s and nine par-four’s, producing a tough par of 69. Extraordinary holes abound, along with those which seriously challenge and those which are more comfortable. The sum total is a layout which both enchants and delights, but which also demands and punishes, testing all the skills in a golfer's armoury – as well as his nerve. Those length seekers who believe Balcomie will be a soft touch, do so at their peril. Not content with a devilishly testing layout, Old Tom designed the course in such a way as to take maximum advantage of its exhilarating seaside location. Shots over rocky bays, long par threes with greens perched on top of vertical cliffs, shots to greens seemingly engulfed by gorse, curving par fours round sandy strands - daring the golfer to cut off too much, shots from cliff tops to greens and fairways invitingly laid out below: all these and more make up the Balcomie experience.

The many memorable holes include the first, which sets the tone for the enjoyment to come with an opening drive from the cliff top to the welcoming fairway below. This is followed by a pitch over a bunker and a turf wall to a blind green with bunkers either side, and a burn beyond. The ferociously challenging fifth, a 447-yard par four, is appropriately named Hell's hole, a name approved by Ryder Cup captain Sam Torrance, who added that it was probably the hardest par four in Scotland. It provides the golfer with the classic dilemma of risk and reward: succeed in cutting off much of the out of bounds rocky bay on the right and the green is in reach or play safe and accept that a third shot to the green is inevitable. With the wind a constant and ever-changing feature, the challenge is enhanced at many of the holes, but perhaps none more so than at the extraordinary 13th. A longish par three at 210 yards, it is played up and over a vertical cliff to an invisible, viciously sloping green and, more often than not, the wind is an added hindrance. This supremely challenging hole was made famous in Michael Murphy's seminal book 'Golf in the Kingdom'. It is followed by another par three which is one of Scottish golf's most scenic holes. The 14th is played from the top of the cliff to a green far below surrounded by bunkers, with an out of bounds beach to the right and fronted by an enormous sleeper-faced bunker. The golfer's difficulty at this hole is to pause long enough from admiring the view to concentrate on the demanding short iron shot that is required. A round at Balcomie is always one to savour and will provide happy memories for many years to come.

Perched high on a rock overlooking the 18th green on the Balcomie Course with 270-degree views of the sea, the clubhouse of Crail Golfing Society arguably affords one of the most spectacular locations for any clubhouse in Scotland. As you look out at sea, beach and rocks and can just discern the Stevenson built "Bell Rock Lighthouse" on the distant horizon, you know that you are in a very special place. Shortly after Balcomie was reopened in 1895 the Tennis Green's Pavillion, in Crail, was purchased for £5 and converted into a clubhouse. The "great need" for a clubhouse was first recorded in 1903 when the Society's dependence on summer visitors and their desire for everything "pertaining to up-to-date golf" was highlighted. The ladies boosted funds through a sale of work, and subscription lists were also opened. The construction of a clubhouse on the present site began in 1904 at a cost of £680. In 1935 the gentlemen's room was enlarged into a "commodious clubroom" with a large window commanding magnificent views of both the links and the sea. Virtually rebuilt, extended and refurbished in 2009, it offers members and guests state of the art facilities. With two bars and three separate eating areas to cater for all requirements it provides the perfect prelude to an enjoyable round or a fine setting to dissect the completed round. There can be few better experiences than standing on the deck, drink in hand, with friends on a balmy summer evening watching golfers below you try to par the challenging par 3 18th hole. Crail Golfing Society has a fully stocked Pro Shop with a wide range of Crail Golfing Society branded merchandise. In addition, the Pro Shop stocks all major golf brands for clubs, clothing and golf accessories. 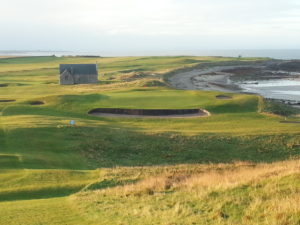