Scotscraig is the 13th oldest golf club in the world, established in 1817. It is a championship course designed under the guidance of Old Tom Morris and James Braid which is conveniently located 15 minutes from the famous Old Course in St Andrews.

Scotscraig Golf Club was founded in 1817 by members of the St Andrews Society of Golfers (later to become the Royal and Ancient Golf Club). One of the founding members was William Dalgleish, who owned lands that included the Garpit, part of which was used as a racecourse. Within the racecourse, golf was played over six holes although no record exists as to how long this practice had gone on. Competitions would be decided over three rounds of the Garpit’s six holes. The winner of the first Gold Medal was Captain Playfair, who later become Sir Hugh Lyon Playfair, captain of the Royal and Ancient Golf Club and Provost of St Andrews. At the club’s inaugural meeting, William Dalgleish was appointed the club’s first Captain. It was also decided that the dress code would be a red jacket trimmed with a green velvet collar and that the golfing uniform should include a buff coloured uniform vest with small buttons similar to that worn on the jacket. The penalty for players not suitably attired would be two bottles of port.

In 1835, Garpit links were tragically ploughed up and the club was adjourned for 52 years. Thankfully, it was re-constituted in 1887 when Admiral Maitland Dougall presided over a meeting in Templar’s Hall in Tayport and was duly appointed Captain of the Club. Having retained custody of the Gold and Silver medals, he presented them back to the Club. At this meeting the rules of golf as prescribed by the Royal and Ancient Golf Club were adopted, with the addition of some local rules, and the following year the ‘new’ course was officially opened. Five years later, that layout was extended to nine holes in time for the 1893 medal. The last decade of the 19th century saw a steady increase in membership, which was met with a growing need for a proper clubhouse. About this time, Tom Morris was invited to advise on the amount of ground required to extend the course to 18 holes.

In the autumn of 1896, an “elegant and picturesque clubhouse” opened. In 1923, the course was redesigned with the assistance of James Braid, one of the Triumvirate, and today still retains many of Braid’s traditional architectural features such as large rolling greens and cleverly positioned bunkers. Scotscraig has been honoured over the years by the successes of its members, exemplified by A F Macfie; winner of the first British Amateur championship at Hoylake in 1885. More recently, the course has been used on six occasions for Final Qualifying for the Open Championship at the Old Course in St Andrews. Scotscraig celebrated its bicentenary in 2017.

A unique mix of heathland and links, the course is a six-time former Open Qualifier venue which provides all-year round golf for members and visitors due to the quality of the sand-based turf. With 18 unique holes laid out in a traditional loop set-up, the course has hosted prestigious tournaments such as the Scottish Seniors Championship in 2002, the Ladies Home Internationals in 2013 and the Scottish Boys and Girls Amateur Championships in 2017. Scotscraig is a test of accuracy rather than length and it will reward the player who plans each stroke with the next one in mind.

The large rolling greens and well-positioned bunkers will present a serious challenge to all golfers, as will wayward shots, with many fairways lined with dense gorse and bracken. It is described by Justin Rose as a “great course, great greens and very friendly”. Scotscraig was used as a qualifying course for the British Seniors Open in July 2018, The Open being held at The Old Course, St Andrews.

Scotscraig Golf Club, the 13th Oldest Golf Club in the world has a clubhouse which oozes character with memorabilia displayed throughout the clubhouse for all to see. There is also evidence of major Championships which have been held at Scotscraig over the years - Local Final Qualifying for The Open when held at St Andrews, SPGA Tournaments, Internationals and SGU National events. The Dining Room is a lovely setting overlooking the 18th green. Dinners and high teas are served in the Dining Room. Special occasions can be booked upon application. The menu is extensive - ranging from bacon rolls and coffee to Dinner and wine. The club also has a putting green for practising before play. 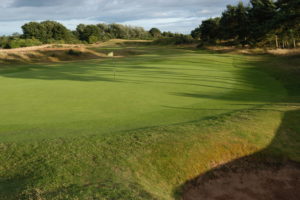